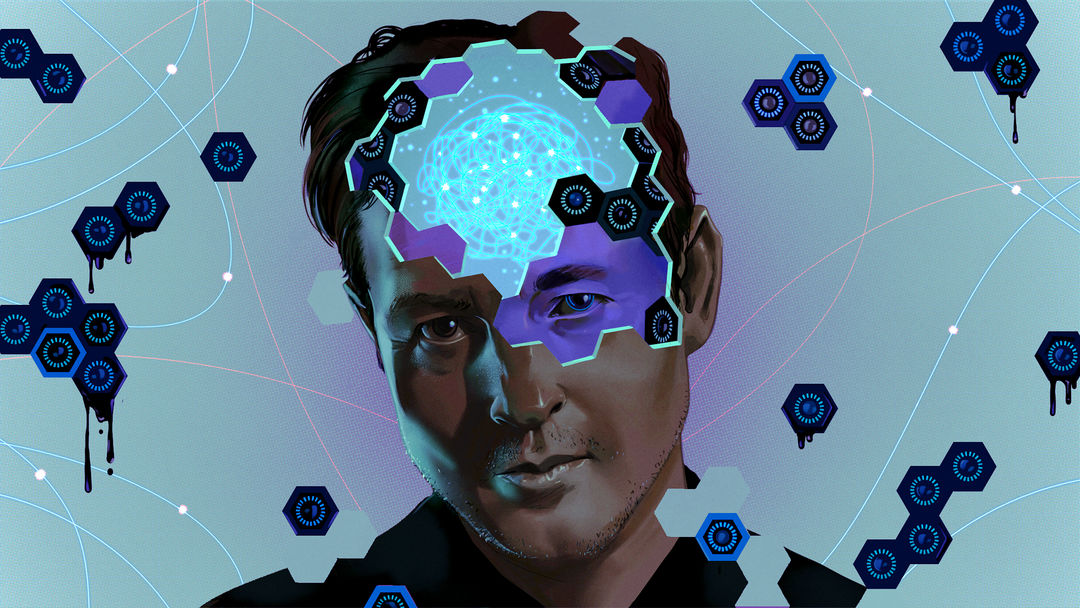 Leigh Whannell is a director, producer, screenwriter and actor from Melbourne, Australia. He has directed the feature films Insidious: Chapter 3 (2015), Upgrade (2018) and The Invisible Man (2020). I reached him by phone to chat about his top five title sequences.

In the last few years, you've done a couple of tweets talking about some title sequences that stand out to you, which made me realize I had to talk to you about your favourites — your top five.

Leigh Whannell: I could talk about five title sequences but I’m not sure if I could arrange them from five to one! Maybe you can fire questions away and I’ll talk about five.

We don’t have to rank them at all!

LW: Oh, good. This’ll be fun! [laughs] I’m a big fan of title sequences and so I’ve checked out your site before, many times, so it’s fun to be talking to you.

LW: The first title sequence that comes to mind for me is Goodfellas. It’s very simple. It highlights something for me about title sequences that I love. In the age of CGI, I feel like anything is possible. Sometimes that has the negative effect of people throwing the kitchen sink at a problem. You can do anything, so then the problem-solving evaporates, in a way. With a computer and some skilled technicians you can pretty much invent anything. For me, what’s great about title sequences is the idea.

LW: I’d rather one singular clean idea than a bunch of noise and movement. A lot of the superhero movies will spend a lot of money on title sequences but, well, that doesn’t necessarily prove to me that there was a lot of creativity and a great idea at the center — it proves they had a big budget. That’s what I love about Goodfellas. This clean idea. The credits move across the screen like cars. I believe – I could be wrong here and committing an Art of the Title sin — but I believe Saul Bass did those titles, who is obviously a title genius.

LW: Yes! It’s just a clean, simple idea. I don’t know that people would think much of it. It’s not calling attention to itself but there’s a great idea there that relates to the movie at hand and Saul and Elaine Bass, they did this a lot. They did a title sequence for a film that I think was called Mr. Saturday Night?

Oh yes, the Billy Crystal one.

LW: Yes! The opening titles was a bunch of food being made. Even as a teenager I remember that staying with me. Somehow the food being made related to the very next scene.

Sometimes the Basses' title sequences don’t just plug into the theme of the movie but it’s related to the scene that’s about to happen. I think someone is cooking in the next scene. The movie isn’t about cooking but they made a title sequence that flows into the movie. And that’s what Goodfellas did. The movie isn’t about car racing. The reason the titles are zipping across the screen like cars with that sound effect is because the very next scene is someone driving. And I love that. I want the titles to be integrated into the movie. That’s what I wanted to do with The Invisible Man. Come up with something very simple — not a lot of fireworks but something that spoke to what the movie was.

Speaking of cars, another of your choices that you mentioned was Kiss Me Deadly.

LW: Kiss Me Deadly is a great movie on so many levels, I love it. It checks so many boxes for me as a film fan. It’s film noir. It’s set in Los Angeles. I have this real affinity for movies set in vintage Los Angeles. You’ve got all this great footage of Bunker Hill and neighbourhoods that have been torn down in LA. Also it’s kind of avant garde in a way. There’s a lot of things about it that are very artful and ahead of their time. One of those things is the title sequence. It’s so strange.

LW: This was the era of dramatic title sequences that were full screen and the orchestra would be playing and everyone on the crew would get their card. When I see a film of that era that thinks outside the box, that really sticks with me. I just love the titles moving up the windshield of the car in reverse. And the breathing! It’s so strange and affecting. The filmmakers get extra credit for that because it would have been such an outside-the-box decision to do that. To be like, Instead of music over the opening titles, we’re just going to have breathing. The woman’s breathing. If you did that title sequence today I’d think it was good, I’d think it was interesting, but back then? You just get all this extra credit for me. That’s definitely one I love.

The other part that makes it so powerful is the music, when it comes on the car radio. It’s this really calming, sort of floating song by Nat King Cole.

LW: An example of a more modern title sequence that I love — just to prove that it’s not all about these older films [laughs] — is Zombieland. I was really struck by the creativity in that title sequence.

To me, a title sequence is not just about the font that you use or the way that the titles appear, it’s about everything. The soundtrack, what’s playing over the titles. Zombieland uses that Metallica song. I’m a fan of Metallica and I haven’t seen their music used in movies very much, so for me half the fun is listening to that song but the way it matches with the images… it’s exactly what I was talking about before. You know that someone had really thought about this sequence. It’s hilarious.

One of the conceits of the film is that there are rules, how to survive. I love how the typography is carried throughout as one specific, consistent element.

LW: Absolutely! The thing about movies for me is I love every part of them. To use a crappy analogy that might offend the fine folks at PETA, it’s like eating the whole animal. [laughs] This is the best analogy I could come up with on the spot. You know how they say, "the whole pig!" Or "the whole cow!" I’m not just interested in the ribeye, it’s every bit of it. Some filmmakers are known for their dialogue and it’s clear that’s the part that they love. Whether it’s Nora Ephron or Judd Apatow, you know, their films really hinge on scripts. Or with Michael Bay, you might say this person’s more interested in what the camera’s doing, or explosions. The greatest movies for me are ones where every single part of the film is great.

LW: Films are just too hard to make and they take too long for any part of it to be an afterthought. Title sequences are this crucial part of a whole and you can’t be a whole if everything doesn’t have thought behind it. And by the way, not every movie with a great title sequence is in the AFI Best 100 Movies Of All Time list!

LW: Another title sequence I love is Ruthless People. I really love this film. It’s an ’80s classic. I think Danny DeVito’s hilarious in it, Bette Midler’s hilarious. As we were saying before, with Kiss Me Deadly, I feel like this title sequence deserves extra credit because to do that back then was very difficult! Nowadays, every second movie and certainly every blockbuster has an animated title sequence. It’s mandatory if you’re making, say, a "Plastic-Man" movie that the title sequence needs to be like, CGI plastic forming a human being and we’re zooming through plastic! And the titles are whooshing up to the screen in 3D! But back then, you really had to do a lot of work to do an animated title sequence. Can you imagine going into a studio in the ’80s and being like [does a cheerful voice] "So I’m thinking the title sequence is animated!" [laughs] It would’ve been so hard. The fact that they did meant that this was important. It’s a comfort food movie for me. It reminds me of a very specific time in my life when my family would sit around and watch movies together. In the ’80s, I was growing up in the suburbs of Melbourne, Australia and a big ritual for my family was Friday movie night. My brother and I would go with my mum to the supermarket, she’d do all the shopping and she’d let us pick a movie from the video store. It was really a special time for me. We brought Ruthless People home one night and I remember I thought it was funny but my parents were just crying laughing. When you’re a bit younger, it’s curious when adults find something hilarious. You’re curious about adults and what they find funny. I remember as a kid loving the title sequence. It sort of tells you that this is gonna be dark, or this is gonna be really mean and mean-spirited. [laughs] I watched it again recently ‘cause I’m going through a nostalgia kick. I feel like Ruthless People might be the most 1980s movie ever.

So, that’s four? The pressure’s on! [long exhale] Gosh.

LW: I think I’m going to have to go with the old classic Se7en. I know that as far as title sequences go, this is not an original answer. When you watch it today, it doesn’t feel that original anymore because it’s been copied so much. All the imitators have retroactively diluted that title sequence but the fact that it’s influential should not prevent it from being called out for the classic that it is.

LW: It’s a scene in the movie, it’s a trip through the mind of this serial killer. The influence of that title sequence is very felt — it’s the shot heard 'round the world for modern genre films. It’s beautiful. And it’s the type of thing that makes you want to think about title sequences. For me, the title sequence should not be wasted frames. Everything should be information about the world, the people, the story. It should grip the audience. Se7en is a prime example of informing the audience about story while the titles are running. It’s really artful and great. The performances are great, the script is great, the cinematography is incredible, the music is great, the sound design! I love sound design so much! I’m obsessed about sound design! [laughs] There’s a part of me that gets disappointed if one piece of that pie is forgotten about. If all of it is great but the title sequence is bland, I’m like, Ah man, you were so close! [laughs] All you needed to do was put some thought into the title sequence and you could’ve had a perfect Leigh Whannell ten!

Do you remember when you first saw Se7en, the circumstance, your reaction to it?

LW: I saw it at the Knox 10 Multiplex in the suburb where I lived. I was stunned by the movie. I could tell that it was different and ahead of its time. I remember I was with friends of mine who were not film obsessives like I was and they were talking about the title sequence. My good high school friend, Shane Fisher, he went on to become a carpenter – shout out Shane! – I remember him saying, "How good was that credits at the start?" It reached people beyond film obsessives. It had an impact on everyone’s lives who saw it.