A billion dollar brain – a supercomputer – is calling, and it has chosen the bespectacled British spy for a mission to Helsinki. With the frantic blast of horns, the “how” of that selection is revealed to be the whirling of magnetic tapes and shuffling of punch cards. PALMER. PALMER. PALMER. Infallible decision-making courtesy of the best tech of the era.

This mechanical spymaster is a vacuum tube Skynet, its sinister string-pulling and cold calculation are aided by the deft button presses of feminine fingers that seem to match the rhythm of that languid piano score. Like us, the brain has been watching Palmer for some time. Through compound eyes it has followed those thick turtleshell rims one byte at a time, from IPCRESS to Berlin, into the arms of women, and through the barrel of a gun. Over and over, it analyzes, organizes, and compiles a symphony of numbers, colors and data, playing and replaying what it knows about the mod Palmer in a series of abstract tableaux, seemingly unable to decipher this cool spook. 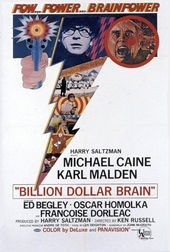