Directed by Martin Scorsese in 1991, Cape Fear is a remake of J. Lee Thompson's '62 film adaptation of The Executioners, a novel by John D. Macdonald. Scorsese’s film replaces Robert Mitchum's brand of vengeful sociopathy with that of Robert DeNiro in the magnetic role of Max Cady, an ex-con out for revenge against district attorney Sam Bowden (and his family, by proxy) for burying evidence in order to convict him of aggravated rape 14 years prior.

As always, Scorsese brings his signature intensity and bravado to the film, along with his inner film geek, enlisting the talents of Elmer Bernstein to revisit Bernard Hermann's haunting score, veteran cinematographer Freddie Francis, production designer Henry Bumstead – best known for his work on Hitchcock pictures – and, fittingly, Saul and Elaine Bass for the main title sequence.

Scorsese has never hidden his admiration for Saul Bass; as a film savant and historian, he considers Bass a godfather of modern title design, having redefined the craft almost single-handedly in the early ’60s through both his graphic and contextual innovations. "Before I ever met Saul Bass, before we worked together, he was a legend in my eyes," said Scorsese in a piece he wrote for The Telegraph. "When we were growing up and seeing movies, we came to recognize Saul’s designs," he said, "and I remember the excitement they generated within us: like Bernard Herrmann’s scores, they added a whole extra dimension to whatever picture they were part of."

As with Bass's titles for Carmen Jones and Storm Center – which had by the ’90s been co-opted as a title design standard – the Cape Fear titles are a cocktail of mixed symbols and metaphors, blending together the film's four central themes:

Together, these symbols present an ambiguous portrait of the film's moral compass, assigning no clear label to any one element. Instead, they are blended as a series of timed cross-fades transitioning from day to night, creating a mélange of conflicting emotional messages, mirroring the motivations of the film's central characters. Here, the Basses offer no personal bias, only introducing the viewer to the themes in which the film is set and framing the noir-ish undertones of its presentation.

To reinforce this moral ambiguity, the elements are reflected in an open body of water, superimposed over the perceived safety of the affluent, titular cape. But the reflective distortion calls into question the motives of Cady and Bowden, who both follow polarized and steadfast ideologies, galvanizing the film's obsession with trust, betrayal, manipulation, and revenge.

While the techniques used by Saul and Elaine were not novel to the title industry or to their own work, they are nevertheless an apt contribution to a film which is very much an homage to the modern crime thriller genre which Saul Bass had helped define early in his career. 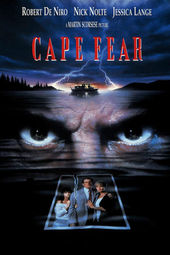