When Art of the Title watches a fluid Steadicam composition what takes place is a kind of sustenance.

Filmed at Rua Teodoro Sampaio, famous in São Paulo (Brazil) for its concentration of shops selling musical instruments, the opening sequence to Anna Muylaert’s film Durval Discos is organic in its ease as DP Jacob Solitrenick treats us to the relaxed pathology of the street.

At once you figure the arrangement and mute any notion of it, allowing the credits to simply come when they come.

A discussion with Director ANNA MUYLAERT.

What was your inspiration for such an original opening?

AM: From the first draft of the script I had this idea of showing Durval Discos’s environment with all the words that we have to read while walking through the city. Later, when in production, we studied many sequences, including Orson Welles and Spike Lee’s long shots.

How long did this sequence take to execute? How many takes did you do?

This sequence was treated like a short film inside the film. We rehearsed it many times, over one month. We chose the city block where it would be done and started experimenting. I used a video camera and walkman and walked the whole way, feeling the music and choosing good places to put the names. Then we would look at it together with the crew, and the art director would give me the ideas of the places we could place the credits (the concept was to put the names in places where there normally would be something written; the names should not shine on screen, they were to be just part of the city.)

After a number of these sessions we finalized the shot.

Against the wishes of the production, I decided not to close the street. I believed we could do it in a documentary way. My DP, Jacob Solitrenick told me he would do the shot as I wanted, but that it would only work if it was a cloudy day. Otherwise he could not make such wide aperture changes in one shot (because of the lighting differences between indoors and outdoors).

I wanted to take the risk. I trusted him.

On the day of the shooting, it was cloudy, so we were optimistic. It was a Saturday morning, so the street was not to crowded and everything seemed auspicious.

The art department put all the names in their places. I had to explain everything to the steadicam operator (who had not rehearsed anything). I ran beside him and directed him while he was doing his movements. Our major problem was the moment we needed to cross the street, but I told him that we would cross it not at a particular time, but just after seeing the key man.

We did a few rehearsals and shot. The first take was very good, but we decided do make a second one and that’s the one on screen. And that was it. Two shots.

The most beautiful thing to me about this shot is that many people on screen are not extras – just people walking on the street (exceptions: the skater, the couples kissing, the guy with the t-shirt in the game house, and our producer Maria Ionescu having coffee in the bar). Everyone else just appeared and didn’t look to the camera. Their “performances” were beautiful, like the woman we follow after the bar. These people came to the camera and disappeared forever… 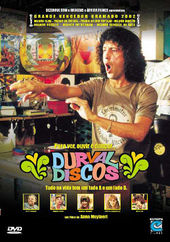