Director Ingmar Bergman, speaking about his 1953 film Sawdust and Tinsel in his autobiography Images: My Life in Film, said “One could insist that the film is a pandemonium — but a well-organized pandemonium.”

Its opening sequence, featuring ornate lettering by designer Alva Lundin over images of an illustration-festooned street organ, captures this notion beautifully. The barrel organ, or harmonipan, is a mechanical instrument that, when its crank is turned, plays musical tones and sounds. This one clearly belongs to Cirkus Alberti and its surface features swans, cherubs, flowers, vines, and an oval painting of a woman on a horse and a ringmaster, a nod to a pivotal, tense scene in the film. Lundin’s stunning calligraphy runs overtop of these images, creating a captivating chaos. First an elegant cursive, then a thick all-caps carnival lettering with hairline flourishes, and then a hodgepodge of circus-style lettering, thick and ornate, with dots and lines through the stems and jaunty crossbars. As the music ominously crescendos, a final background illustration appears, also likely by Lundin, which isn’t on the organ: a caravan of wagons pulled by dark horses which fades into the film’s opening shot. As an amalgam of illustration and various lettering styles, the sequence is a prime example of Lundin’s versatility as a designer and artist and, luckily, just the tip of a very large iceberg. 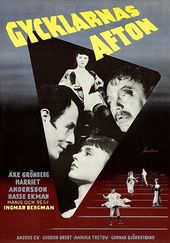