What is it about the power of single-take shots? Steadicam or otherwise, wherever they fall in a movie's timeline, they seem to have a magnetic pull.

With this Strange Days post, we close the curtains on our Single Take Titles series. In a November 1995 issue of American Cinematographer Paula Parisi described Kathryn Bigelow's tech noir as "...richly textured and technologically groundbreaking...Strange Days [is] a noirish thriller that unfurls almost exclusively in the post-meridian hours...set on the eve of the millennium...tracks the dubious activities of a gang of fringe operators who dabble in a new kind of narcotic: 'sensory recordings' (SR)."

'This is society's underbelly, the bottom feeders,' Director Kathryn Bigelow sums up. 'It's a world of hustlers, of night crawlers...this is about people who have dark needs that have to be satisfied. They're living at an intensity that the world of the day does not promise or hold.' To portray [that] world, Bigelow decided early on that ‘the photography had to be the looking-glass through which you want to enter...there's an excitement that the darkness holds.' Strange Days expands the cinematic vocabulary with an abundance of unusual POV shots used to suggest sensory recording and playback. 'The camera became the eyes of whomever's experience we were recording,’ Director of Photography Matt Leonetti, ASC notes. 'A variety of camera systems were used to achieve the look,' says James Muro, who in addition to operating the Steadicam, did a lot of hand-held work using an Aaton and a tiny Robings SL, a 35mm camera that weighs about six pounds with film. Reserving the Steadicam for the more conventional shots...Muro relied on the Robings for the more fluid POVs. Coupling it with the Helmet Integrated Display unit developed by Lightstorm Technologies...Muro was able to hold the camera anywhere while maintaining a viewfinder image in his helmet device. This enabled him 'to literally put the camera where the actor's head would be.'

Titles by: Pacific Titles and Optical 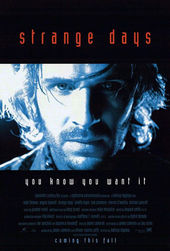