In his hit 1963 ballad “Ring of Fire”, singer Johnny Cash famously refers to love as a “burnin’ thing”. It’s the perfect metaphor and one that anyone who’s fallen for someone can easily relate to. It’s also a sentiment that will be familiar to fans of director David Lynch. The filmmaker has thoroughly explored themes of love and obsession in one twisted way or another over the course of his career, but there’s one Lynch film in particular – Wild at Heart – that concerns itself above others with that tempestuous, untamable thing Cash sang about.

Produced and released at the height of Twin Peaks mania, Lynch’s 1990 crime thriller follows two lovers, Sailor Ripley (Nicholas Cage) and Lula Pace Fortune (Laura Dern), on a surreal road trip through the American south. The pair are crazy in love and on the run from a group of killers dispatched by Lula’s insane mother. Wild at Heart is a film that is as scary as it is sexy, thanks in large part to its compelling leads and a supporting cast full of oddballs (many played by Twin Peaks regulars on hiatus). In true Lynch fashion, this is a movie where anything can happen – and it usually does.

That chaotic quality is best exemplified by the film’s opening title sequence. Cage and Dern’s credits appear on screen with the hiss of a struck match, the small flame nearly extinguished as the title card smashes into the screen with the force a multi-vehicle collision. Lula and Sailor’s love is a combustible mix – it’s a spark that ignites an all-consuming inferno. The sound of the roaring blaze nearly drowns out Richard Strauss’s “At Sunset” (Im Abendrot), a lush but melancholy composition about facing death hand-in-hand with the one you love. Lynch uses the opening moments of Wild at Heart to illustrate the raw power of Sailor and Lula’s connection and to establish one of the movie’s most important elements.

From the first credit to the final scene, fiery imagery is a recurring motif in the film. In several flashback scenes it’s revealed that Lula’s father died in a violent act of self-immolation – an incident secretly witnessed by Sailor. In another instance, a wild night of passion is bookended by a lit cigarette and the flame of a small tea candle. Later, in one of the film’s most poignant scenes, Sailor and Lula confess their love for one another bathed in the orange light of a brilliant sunset. Strauss’s appropriately titled piece can again be heard here, directly connecting the scene to the film’s opening.

Wild at Heart’s scorching title sequence is the perfect vehicle to introduce viewers to the story of Sailor and Lula. Not only is it emblematic of the pair’s red-hot romance but it’s also an enduring testament to the terrifying and destructive power of love – as only Lynch could tell it.

Music: "Im Abendrot" by Richard Strauss
"In The Mood" by Glenn Miller 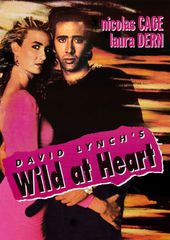