The fourth in a long and creepy line of main title sequences, the opener for American Horror Story: Freak Show is also quite possibly the best.

A freakishly functional marriage of stop-motion and CGI, the sequence continues the series’ play with body horror and disfigurement, this time twisting up the tropes with a trip to the big top. The cast of characters includes a three-legged woman, worn old masks, two-headed critters, conjoined skeletons, and clowns (so many clowns), all shambling to the carnival-infused theme by sound designer Cesar Davila-Irizarry and musician Charlie Clouser (formerly of Nine Inch Nails). The sequence is a terrifically evocative opener and a fun romp for veteran fans of the horror genre. It’s also what you’d imagine Tim Burton and Kyle Cooper might dream up if they had a sleepover party and played dolls. 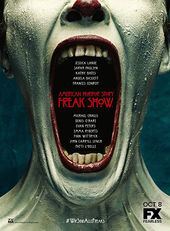