This is Lolo. He emerges from a sea of vibrating colour, cool and effortless. The hand-drawn opening sequence for Julie Delpy’s film Lolo, created through production company The Film and directed by French duo Laurent & Françoise, establishes the spirited and irregular tone with smashing aplomb.

The duo, previously known for their short animation LSD ABC, here dive into title design for the first time, and likely not the last. The sequence, a pastiche of ’60s cartoon stylings and warm swaths of pigment, features Lolo striding across the landscape to Andy Williams’ jaunty track “Music to Watch Girls By”. Lolo transcends boundaries and dances in time. He winks knowingly, all cigarettes and seduction, and just like that, it’s all over. He’s the future of humanity.

When you began to think about introducing the story of Lolo, how did you envision the opening of the film?

Julie: Like The Pink Panther, really. I wanted something playful, like a cartoon – fun, childlike, and modern at the same time. Blake Edwards, that's what I wanted.

Laura: Our first meeting took place at The Film where we met the producer, Michael Gentile. At that time, we had not seen the movie yet but we had read the script. We talked about the characters and which key elements from the film we should use. Michael mentioned Julie’s wishes for a little sketchbook of Lolo and it turned out this was one of the ideas we had while reading the script as well, so we started from there.

How did you intend for the title sequence to work within the film? What sort of feeling did you want the opening of the movie to have?

Julie: Playful. This is a film but, above all, a comedy. [I wanted it to be] as if a kid had made that sequence, to give a sense of colour and fun to the audience.

Laura: We wanted to do something offbeat but still keeping enough elements so that we could recognize Julie’s universe. We tried to translate the mood of the film in our own way, trying not to give too much away.

François: The titles were intended to put the audience in the mood, taking as many as elements as we could from the film itself, but in a way that it would not be too obvious. More like afterwards you would say to yourself, "Oh, this came from here and that came from there." We considered it a mini-movie introducing the real movie.

The title sequence has a very 1960s quality to it. What kind of research did you do to prepare for that, to get more familiar with it?

Laura: After we agreed on the sketchbook idea with Julie and the production, we thought it was the right time to do something handmade. Then, we watched classics and focused on animations made with felt markers. We started with George Dunning's Yellow Submarine. We also watched Richard Williams' work, especially his titles for The Pink Panther since Blake Edwards was mentioned really early.

François: We were looking for how to make it look vintage but still in connection with the movie and as different as possible from what we had done so far. So we chose to use as little digital as possible. We had not considered how much work it would really require! But this was the right time to try it, especially since Julie was looking for something that would look “arts and crafts”.

Laura: Julie was editing the movie in LA, so we mainly talked through Skype. We also had meetings in Paris with The Film to share our progress. Julie had a clear idea of how Lolo’s animated character should look so we had a lot of feedback on that.

Julie: We went over the colours, rhythm, playfulness, the design of the Lolo character, adjusting things as we went along. We had fun with different ideas, often about rhythm, colours, and what would make sense with the credits but not too on-the-nose either. The DOP gets a longview shot like a James Bond thing, then Lolo coming out of the egg as it is a theme in the film.

François: Obviously when she came to Paris for the editing, it got easier to discuss ideas, style and progress.

How did you work with the music?

Laura: It is a complex exercise since credits need a specific time on screen depending on the positions. Here, we really used the music as the main structure for the titles, it really leads the whole sequence by its rhythmic changes.

François: The timing for reading the titles did not always work the way we wanted. We tried to stick as much as we could to the tempo and the groove of the track. There were a lot of tracks considered.

Laura: Some of them sounded too cartoonish and did not really match the overall mood.

Julie: We were proposed different songs and that one stood out, with its rhythm and period feel.

François: One we did not use but that I personally really like is "Mr. Bumble" from Syd Dale but it was a little complex, and also it would have been less consistent with the movie. Maybe next time.

Laura: I realize that music is a key element for my creations, I always use it as the structure for my films and not the other way around.

François: I am a huge fan of titles, and I started to be interested after I learnt about typography in general, and it precisely began with your website. Also, when possible, we always tried to put one in all of our films, whatever their length.

What are some of your personal favourites?

Julie: The Pink Panther, Dr. Strangelove, Vertigo, so many more… Edward Scissorhands. It’s very dreamy and basically tells a story with visuals. Touch of Evil, the long shot, all one shot. That amazing technical crane shot, with tension all along.

Laura: I like conceptual titles, when there is a real bias, like Jackie Brown, Une femme est une femme, Napoleon Dynamite. Walk On The Wild Side and The Facts of Life by Saul Bass. I got attracted by typography during my studies so mixing both animation and typography is something I really like. Titles can drastically change my opinion on a movie, it can add a very peculiar touch and I am really attached to that.

François: Because he is the master and mentor of us all: Blake Edwards’ The Return of The Pink Panther, directed by Richard Williams.

And finally – because otherwise I could give 30 pages of references – Jeunet and Caro’s Delicatessen. I like this example because it feels different from the previous ones and because I love it so much.

In 2013, you made a short film called LSD ABC, which sort of set things in motion for you, right?

Laura: LSD ABC is our first real collaboration. In my opinion, it is our most developed and personal project. The film went quite viral and people had great reactions to it. I think they perceived it as a UFO movie, something quite weird, but in a good way – this is what made us the happiest.

François: It was our first real project together, although we had worked alongside for a couple of years already. It’s one of our greatest successes so far. I think what we did on LSD ABC really reflects our love for titles.

Laura: In 2014, one of our friends proposed that we screen LSD ABC before his first short film screening. It got screened during summer in Paris and David Pierret, the assistant producer, was there. One year later, he asked us if we would be interested in creating a title sequence for Julie Delpy’s next film and we are truly glad he thought of us!

What’s coming up next for you?

Laura: I’m finishing a music video and a short animation for a French swimsuit brand. Then, I’d like to develop my own projects. I have two things in mind: a music video with François and my own movie, to be continued…

François: Laura and I are working on a music video mixing animation and live-action. Also, a short film is in preparation.

Laura: Music videos are my favourite, along with title sequences – I consider it a similar exercise. The process is really cool since you work directly with the musicians, you can have a different artistic approach that brings the piece further.

François: This has been, and still is, an incredible experience, I met some great people through it, from animators to musicians. Obviously, it changed a lot my way of composing and editing the films I produce.

Music: "Music To Watch Girls By" by Andy Williams 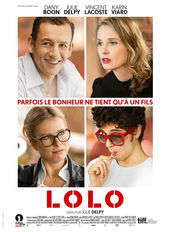