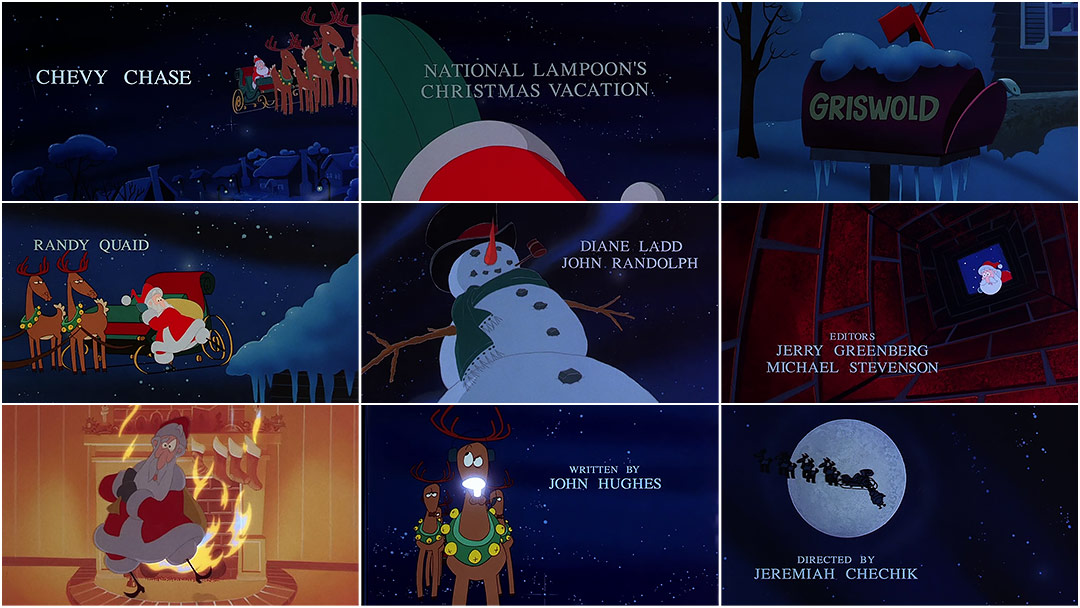 As the third feature film title sequence produced by Kroyer Films in 1989, National Lampoon's Christmas Vacation is probably the most well-known.

Santa Claus, our eternally and endearingly plump hero, just can’t catch a break. In a series of unfortunate events, seemingly everything in this sleepy suburban home becomes an object of peril. A kind of diabolus ex machina consistently interferes, paralleling the experiences of the film’s salty protagonist, Clark Griswold.

The typography, a lifeless white serif, certainly represents a missed opportunity, but the Kroyers’ pioneering “combo” technique – which appeared previously in the titles to Honey, I Shrunk the Kids – is employed to great effect. The musical theme for the sequence, aptly titled “Christmas Vacation,” is the work of husband–wife songwriting team Barry Mann and Cynthia Weil and includes the voice of Mavis Staples. Initially, however, the sequence featured an original score by Angelo Badalamenti. The song was a last-minute insertion into the opening as an attempt to bolster the film's pop attraction. While it is in no way synced up with the animation, it's friendly, uplifting, and era-appropriate. Altogether, the elements culminate in a charming opening sequence to one hell of a holiday classic.

Animation Director BILL KROYER details the creation of the title sequence for us.

Our company had done several other titles and word gets around. We got a call from Warner Brothers to take a meeting.

What was your first meeting like with Director Jeremiah Chechik?

We screened the film first. They invited us to a screening they had arranged for Chevy Chase, who had not seen a cut. Oddly, Jeremiah was out of town for it.

We came back a few days later to have the pitch meeting. We were in one of the editorial rooms on the Warner lot. It was an unseasonably hot day, in the eighties, and Jeremiah walked in wearing a long black trench coat. I thought he looked very creative!

How did that meeting go? How much freedom were you given with developing the sequence?

Jeremiah was terrific to work with. He knew the comic tone he was after, but decided to let us come back with something completely our own. We had actually hoped for a more specific direction from him because having seen the cut, we realized they had already spoofed almost every Christmas tradition you could imagine. What was left for us to spoof? The toughest assignment is to be given a blank slate with complete freedom.

After several days of unsuccessful brainstorming, we got pretty dejected. We did what all good creative people do in such situations: we went to the bar. There's an English pub in Burbank called The Buchanan Arms, so we went there and started to down pitchers of beer. After a few, we got kind of surly. Finally, Ralph Eggleston, our designer, said: "Let's kill Santa!"  That's the idea we went with!

So, how did you go into production?

We'd do boards, or designs, and meet with Jeremiah and his producer. They'd give us notes, which happily were not big changes – it was a very smooth process. Jeremiah had good editorial tweaks, and we went with most of what we had conceived.

We had an interesting interlude with the married couple who wrote the title song. They had not recorded it yet – it was supposed to be under our titles – and usually you time your animation to music that already exists. They came to our studio to play it for us on the piano. What was funny was that they were still writing it, and they got into a rather nasty fight about it right in front of us! We kept thinking: these two are married?

So there was a plan for a title song, but it wasn’t finished and so Angelo Badalamenti [Twin Peaks, Mulholland Drive] post-scored our animated title. I mean, Angelo Badalamenti was the composer. He scored our opening, and it was really great. I loved that version, and that's the one I have on our reel to this day.

When the movie came out, they slapped the song over our titles and completely destroyed the timing of everything! I thought that was really too bad.

The title sequences for Vacation (1983) and European Vacation (1985) are both very distinct (postcard and passport-focused main titles, respectively). How much influence did they have on the direction of Christmas Vacation’s title design?

None whatsoever. We never looked at them!

My “center” is the classic training I got from the last of the Nine Old Men* when I was at Disney. But I had cut my teeth on commercials under Frank Terry, and his variety and sense of entertainment gave me a love of many styles of animation.

Honey, I Shrunk the Kids and Christmas Vacation were released within six months of one another. Was there any overlap between the two projects?

Only in personnel – the same crew did both. It was our whole Kroyer Films crew. I can’t recall everyone, but Tony Fucile, Ralph Eggleston, Dennis Venizelos, Mark Pompian, etc. were all on it. But the process was very different [for Christmas Vacation]. When you work for Jeffrey Katzenberg, he is very hands-on.

Did you use the “combo” technique (the 3D animation software you developed for Technological Threat and HISTK) for Christmas Vacation?

In a big way! It made our work distinctive from anyone else's work at that time.

In CHRISTMAS the sleigh and reindeer were digital – and the tumbling snowman. Almost all the text was digital. Of course, the studio is very strict on single cards, relative type size, etc.

Are there any moments during the production of this sequence that stick out for you?

Other than the drunken conception and the songwriting argument, we had an argument about "the butt crack scene" – when Santa tries to squeeze down the chimney. A butt crack seemed like a natural animation gag, but we worried about the studio nixing it. In the end we just decided to put it in and not mention it. They never mentioned it either, so it's in there!

Do you think that film – and title sequences – have lost anything as hand-drawn animation has become something of a rarity?

The crazy inventiveness of hand-drawn acting and comedy. It was special unto itself.

Christmas Vacation has become a staple for many families to watch around the holidays. Did you have any idea of the effect and lasting impression it would have?

Every film artist will tell you they can never predict. The ones you think will last, disappear.  The ones you just do as fun jobs become classics. You have to find enjoyment and fulfillment in each job for its own sake. You can't control or predict the rest! 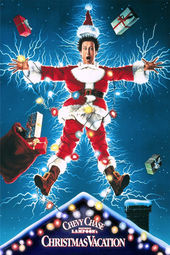