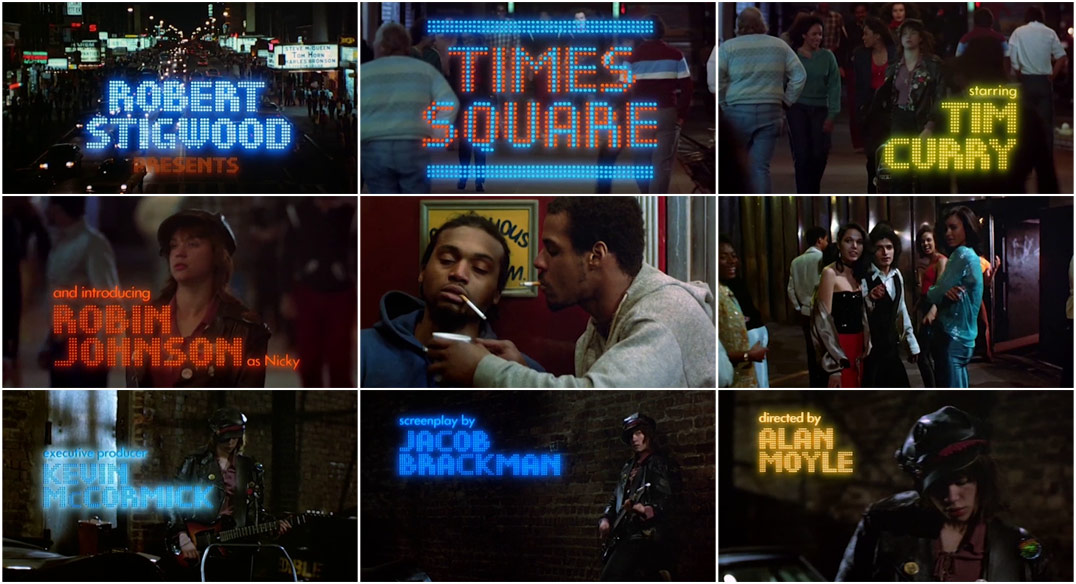 The opening title sequence of Allan Moyle’s Times Square is an introduction to a character and their place in the universe. Times Square, the heart of the city, is suffering, and pulsing at its center, axe in hand, is Nicky Marotta.

Times Square is Allan Moyle’s second directorial effort, the first being 1977's The Rubber Gun. It tells the tale of two misfit girls struggling for purpose and belonging, bucking against the ties that bind and forming a band and a movement under the moniker The Sleez Sisters. Championed by radio deejay Johnny LaGuardia (Tim Curry), the girls screech through town, wreaking havoc and shining an unwavering spotlight on a grimey and neglected neighbourhood. For the title sequence, designer Dan Perri puts the cast and crew’s names in lights, echoing the setting and its neon glow.

The stars of Times Square, Robin Johnson and Trini Alvarado, present electrifying portrayals of girls lost. Robin’s Nicky is magnetic, a girl on the edge, pulling Trini’s Pamela into an unfamiliar but not unwelcome orbit. In the original screenplay, the opening scene was meant to feature Nicky brandishing a knife, defending herself against some “roadies” outside a nightclub. In the film, however, Nicky is placed on the offensive, wielding a crowbar instead of a knife, and facing off with actress Elizabeth Peña and her boss’s car. The scene puts Nicky squarely in the driver’s seat, determining her own destiny even as she reels out of control.

Elements of this movie and the themes explored can be seen again in Moyle’s later films, Pump Up The Volume and Empire Records. Since its release, Times Square has garnered a well-deserved cult following, pushing prices of its rare DVDs into the hundreds.

Robin: How come I can’t walk properly? That’s what I want to know! [laughs] What did I do on this movie, Allan? I drove everybody crazy! [laughs]

Robin: See, it’s actually great that all of this is on tape. Because, you know, Times Square looks like Disneyland now and this is, like, for posterity. This is the real Times Square.

Allan: Oh, my God. You know, we were sued by so many people after – seven different people – for stealing the story [that the movie is based on]. But the person I actually did steal the story from was an unknown little female thug who had left part of her journal under the cushions of a sofa, a second-hand sofa the editor of my previous movie had found. And this little girl had documented what it was like to be mentally ill with no one to talk about it with. And that was the germ of the story.

It’s hard to imagine Robin was only fifteen at this time, because she looks so self-assured, she looks fearless.

The girl in the diary, as far as I could see – because it was a fragment of the diary – was having some kind of fits. And I wrote a script – or a story – called She Got The Shakes. God, I still have a copy of that. I found a copy of that script complete with a black-and-white xerox, this is pre-colour xerox, of a demented-looking girl staring straight into the camera. She Got The Shakes. She ends up in the hospital and of course meets another girl who’s got the shakes, some other psychosomatic acting-out problem.

Allan: So, right in Manhattan on 12th and 7th there’s a mental hospital attached to a – wow, I can barely concentrate with this movie going on. Robin, you were good, very authentic, screaming at the cops. That was all improvised, right?

Allan: Anyway, I had worked in this Manhattan mental hospital when I was young and met a couple of young anorexics with interesting stories, and I stole bits and pieces of that. Then I met Jacob [Brackman] and he basically formed it into a plot, which was a good thing.

A couple of Hollywood studios were interested in doing it, but they wanted to develop it, they wanted to do it in a year, let’s say, with some more writing. And Stigwood got a hold of the script nefariously – it wasn’t sent to him, he just got it – and he pursued us, he went after it. And we were thinking, “Oh, maybe, wow, kinda weird, right?” And I was thinking because of the gay thing attached to Stigwood that he would let us make the gay story the way we wanted to, because the studios were thinking, “Oh, let’s tone down the little relationship between the girls.” And I was thinking Stigwood would let us tell that as honestly and truthfully as we wanted. Of course, that turned out not to be true, but that was the plan. 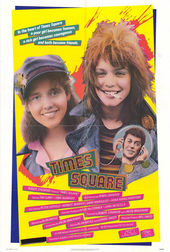