After seeing Gaspar Noé’s 2009 film Enter the Void, director David Fincher had high praise for its title sequence, created by Paris-based designer Tom Kan. He called it “a jackhammer to the middle of your forehead.” Flowing from that same impulse (and after the flop that was 2015’s Love) comes Climax, Noé’s most recent offering to the New French Extremity genre. The film follows a troupe of dancers as they rehearse a stunningly choreographed routine and then celebrate, drinking sangria that, we soon learn, contains a dangerous hallucinogen.

Where Enter the Void took viewers inside the body, Climax penetrates the darkest, shrieking corners of the mind. It’s a visually intense and sonically vibrant film, the sort that plunges you into fresh hell and gets under your skin. Its pulsing, 3D title sequence, again designed by Kan, appears more than 40 minutes in and features enormous typography, driving electronic beats, and bright punches of iconography. And similar to Brady Corbet's 2019 film Vox Lux, the main title card is shifted to the end of the film and the dense crawl of credits to the start.

Kan describes Noé as “among those creators who advance the progress of their field by considering the title sequence as its own whole.” Doing so gives the film a stronger foothold in the memories of viewers, delivering a graphic wallop for the ages. Ten years after the jackhammer, it’s a joy to behold.

Music: "What To Do" by Thomas Bangalter 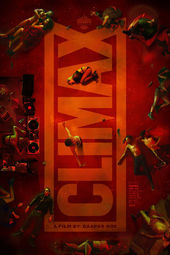